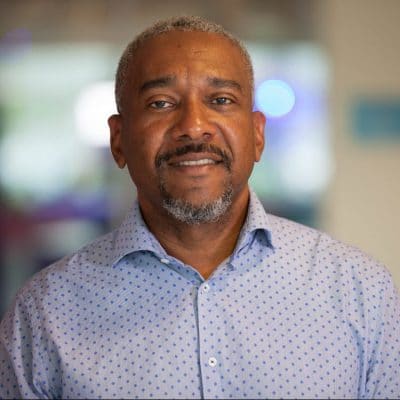 For our update Robert wants to use his voice to draw attention to diversity in healthcare, where a lot is going on. Robert regularly attends congresses, symposia, and too often has to conclude that the public, but also the speakers, do not really reflect society. “It can sometimes be difficult to raise this topic during conversations with organizers, because they can quickly become uncomfortable. Sometimes they see it as a personal attack. Nevertheless, it should be discussed and I feel it is my job as a black man to discuss and raise this.”

According to Robert,  event organizers should make greater efforts to attract a diverse audience. Just placing an invitation on an internet page or sending emails is not enough. They should look for ways to best reach the different target groups and invite them personally. They must also ensure that the speakers are a good reflection of society. I am not just talking about color, but also male / female ratio. For African American men, the risk of dying from low-grade prostate cancer is twice the ratio for men of other races.

Robert is founder (2016) and chairman of HungerNdThirst Foundation and since June 2019 board member of the European Cancer Patient Coalition. In general, Robert creates awareness for taste alteration. People do not realise how big this problem is. He didn’t know it until he got sick in 2012.

During his chemotherapy treatment in 2013, Robert experienced taste disturbance. He associated everything he ate or drunk with a very strong metallic taste. That made him looking for information on taste disturbance during chemotherapy and found lacking information.. His own experience inspirated him to tackle this problem,  after contacting Wageningen University & Research and the Science Shop. Their collaboration led to scientific research into taste changes in oncological patients. Please find more information via this link: www.hungerndthirst.org

Should you have any further questions, please do not hesitate to contact Robert via the details below: