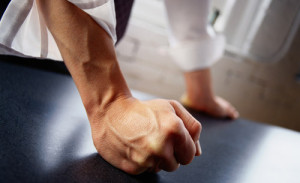 ‘The tissue is not the issue’ I once heard an American scientist say a couple of years ago. What he meant was, rather than focusing solely on the tissue or organ the cancer is affecting, it is more important to stop the division of cells that is causing its spread: in other words, the changes taking place in your DNA. Whether those changes occur in a breast, a lung or the pancreas is entirely random, and explains why we refer to cancer as ‘breast cancer’, ‘lung cancer’ or ‘pancreatic cancer.’ In 2011, Inspire2Live launched a programme called Understanding Life! whose aim is to work towards bringing cancer under control. It is a title that was carefully chosen, and chosen, what is more, by none other than Nobel laureate Paul Nurse, President of the Royal Society in London. It is all about grasping the concept of life. If you understand that, you can understand what it means to ‘deviate’ from the norm that is life. The example I often use to illustrate this is the difference between Bas and me. Both of us patients with follicular lymphoma, a form of lymphatic cancer. Following identical treatments (R-CHOP and Fludarabine, types of chemotherapy), an autologous stem cell transplant (using your own stem cells) and an allogeneic stem cell transplant (using someone else’s), there’s now only one difference between Bas and me: Bas is dead and I’m still alive. The problem is simple: we need to find out why. When in a few years’ time we do find out, it will be clear that Bas and I did not share the same illness. No; Bas had the ‘Bas’ lymphoma and I had the ‘Peter’ lymphoma. And by a complete fluke, mine responded to the treatment. It is that randomness we need to eradicate. That is what science is here to do.

At the moment, it is quite common to offer chemotherapy to women with breast cancer. Yet at the same time, we know that in over half these cases, this treatment has no effect on the disease. It does however cause side-effects such as nausea and hair loss. This is appalling, but while we still have no idea which women will and won’t respond to chemotherapy, we have to treat them all. However, thanks to DNA sequencing, we are now starting to find out who falls into which group, and which women we can spare the side-effects and treat instead with surgery and radiation. Conversely, we will also know which group to offer chemotherapy – admittedly with side-effects, but also with the positive outcome of beating the cancer. You may suffer, but at least you’ll know why. In essence, this is what the Antoni van Leeuwenhoek Hospital will be doing: recognising that each cancer is unique and dealing with each one individually. They will be doing this work in partnership with the UMC in Utrecht and the Erasmus MC. The initiative is known as CPCT, the Centre for Personalised Cancer Treatments. And it is a wonderful initiative.

The analysis of the changes that occur in DNA will answer the question of whether drugs or treatments should be given, and if so, in what combinations. That is when we come up against the final obstacle: the raft of legislation. That is when you really get to know the country you live in. Because the answer you might hear is this: to treat your bowel cancer, we need to give you two kinds of drug at the same time. One of these is already being given, but the other is generally only administered to patients with a melanoma. And health insurance providers will not cover the cost of that drug. We are sorry. We now know what treatment to give you but we are not going to administer it because we cannot get permission to do so. First, we need to be sure that it really works, and this has to be done through a study involving many hundreds of patients. That could take some time. Researchers such as René Bernards, however, take a completely different view of the situation. He reckons things can be done differently, better and faster. René Bernards is internationally known to be the best there is.

Administering drugs for a different cancer than the one stated in the medical guidelines is known as ‘off-label’ use. People use all kinds of terms to make it seem less dreadful, but the bottom line is this: you will die while the solution is just sitting there waiting to be used. Surely we can do it differently, better and faster? So let’s just do it, shall we?