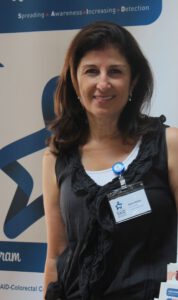 www.saidcrc.org (website is mainly in English but in the process of introducing native language)

I founded SAID NGO in 2016 four years after I lost my husband Said to Colorectal Cancer (CRC) at the age of 59 after a 2.5 years of struggle with this disease. I created this initiative and named it after SAID, to carry on the message he used to spread after he was diagnosed, about the importance of early screening in preventing colorectal cancer.

The ultimate goal of the association is to increase the total number of men and women being screened in the absence of any symptom starting at the age of 50 and recently at the age of 45.

The goal is to help others avoid going through what they had to go through because of lack of awareness about FIT especially from the physicians, and absence of support provided to patients and caregivers.

The mission is threefold: awareness, advocacy and support:

As such, we take part in health forums and conferences, distribute educational flyers, give informative lectures in medical dispensaries, hospitals, banks and schools all over the country and participate in talk shows on the local television and radio stations. We have a very active Facebook page: SAID NGO where we have 4060 followers and we make sure to post all the educative interviews on T. V. as well as all the lectures given by the doctors, Gastroenterologists and colorectal surgeons who are members of our NGO.

We have offered 4365 FIT until the start of the pandemic in March 2020 and helped those with positive results to go for colonoscopy.

The association carries out its function to support through offering: